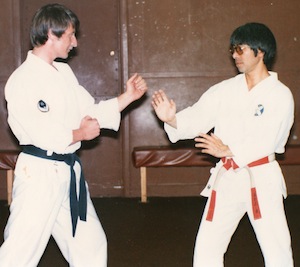 Shi Kon Martial Arts was established in 1988 By Steve Rowe and named by his Iaido Instructor Okimitsu Fuji who drew the calligraphy that hangs in the Chatham Honbu Dojo.  Shi Kon means 'Warrior Spirit' being the spirit or heart of a cultured Samurai warrior.  Shi Kon is the coming together of Steve's training in Karate under the late Toru Takimazawa (he was the Chairman of the Takamizawa Institute of Karate), his Tai Chi training under James Uglow and Ma Lee Yang, his Iaido training under Okimitsu Fuji and Vic Cook and his Jodo training with Vic Cook.

Steve was quickly joined by a host of other top instructors with over a 100 Chief Instructors of 6th dan and above and other groups in Norway, Sweden, Denmark, Czech Republic, Ireland and Portugal. Today Shi Kon has Full time Centres in England, Denmark and Czech Republic.

In recent years, awareness of wide gulf of quality standards and safety in martial arts (and sports generally) has become much more apparent. Medway Council and both the Medway School sports Partnerships have been at the forefront of promoting highest standards: there are more CLUBMARK accredited sports clubs in Medway that just about any other region.

Increasing numbers of official organisations also recognise the need for the highest quality standards. As a result of this in recent years Shi Kon Martial Arts have been asked to run courses for more than 80 primary and secondary schools and currently have 25 permanent after school clubs. The club has also been engaged by organisation such as Age Concern, Alzheimer & Dementia Family Support, U3A, Medway Council, BAe Systems, NHS, University of Kent, as well as organisations working with youth groups such as NACRO, Fairbridge, the Will Adams Centre, and Medway Youth Services.